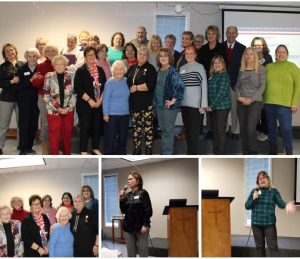 Over 30 talented women from three Delaware Republican Women’s Clubs got to meet officers, ask questions, and learn the myriad ways they can help the organization elect Republican candidates.

“We must take action to make certain that our voices are heard,” said Marilyn Booker, president of the Sussex County Republican Women’s Club.

“There is a lot of noise out there, and I know at times it’s difficult and messy, but we must engage with our elected officials to help them know what we need. Having a well-informed and active team of women participate in the political process is critical. That’s what the Sussex County, Seaford and Kent Republican Women’s Clubs are about. This orientation is the first step in achieving that goal.”

Erin Wienner, president of the Delaware Federation of Republican Women, was also present and helped with training.

“If you do not take an interest in the affairs of your government, then you are doomed to live the under rule of fools.” —Plato

I was honored to be one of the trainers. Well done ladies! It was a great day!