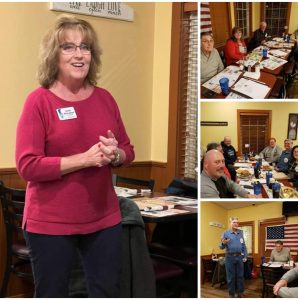 I was invited to speak at the 30th Representative District this evening.

I think it is fantastic to see Attorney General candidate Chuck Welch and his wife Jane. We have seen each other up and down the state. I bet by now Chuck and I could give each other’s talks.

Thank you to the 30th District for the invite.

Chairman Lee Dean introduced Chuck “Let’s Make Crime Illegal Again” Welch, candidate for Attorney General. But an introduction was not really necessary, as it seems like everyone already knows him. Chuck is a life-long Delawarean with a 35-year career as attorney, judge, deputy attorney general, and 29RD representative. Experience matters, and Chuck Welch has plenty of it. He told the group many shameful stories of folks who were victims because criminals were not held accountable.
So, getting crime under control is his first priority. As is the case with most Delaware officials, Chuck knows the current Attorney General. She was a firm prosecutor. But as AG, she has turned political, calling for no cash bail, more gun restrictions, and permanent voting-by-mail. She brags about how many criminals she has released from prison. She has an agenda. What? An attorney general is the state’s top law enforcement officer. Their job is to enforce the law, not make it. Chuck Welch quotes John Adams: “A government of laws, and not of men.” We already have too many people deciding which laws to follow and which can be ignored.
Chuck Welch’s second priority is to combat drug overdoses. Did you know that Delaware is ranked #2 in the U.S. for the most drug overdoses? Drug dealers must be removed from the streets of our communities. While serving as a Judge, Chuck founded and was the Presiding Judge for the Court of Common Pleas Drug Court program in Kent County. He has heard it all. More importantly, he knows all participants, and can pick up the phone and call anyone in the court system to ensure that justice is served, from public defenders to judges.
2A? Chuck Welch was Delaware’s first recipient of NRA’s Defender of Freedom Award, is a current member of the DE State Sportsmen’s Association (DSSA) Board of Directors, and was their guest speaker at their 2021 banquet. You can trust him to defend the rights of legal gun owners.
Chuck held the group’s attention for almost an hour, answering questions and demonstrating a complete knowledge of local politics, in general, as well as specific pending legislation. Everyone should go to one of his many upcoming meetings (see calendar attached) and read more at:
https://www.chuckwelchforag.com/
https://www.facebook.com/ChuckWelchForAG
Erin Wienner took the stage, saying, “Now that you know what needs to be done, here is how to do it!” Erin is the Kent Co. Republican Volunteer Coordinator, and President of DE Federation of Republican Women Club. She asked for people to work in the Dover KCo. GOP Headquarters, anytime, doing anything from answering the phone to putting together yard signs. We also need volunteers to help set up and break down at the Feb. 12 Lincoln Day Dinner. Please respond by email at ewienner@gmail.com or by phone at (302) 540-8157.
Joining the DE Federation of Republican Women group is an important way to influence policy and develop candidates for future leaders of Delaware. This is their 70th year, and there are five chapters in DE, accessible to everyone. Learn more at:
https://dfrw.us/
30RD Representative Shannon Morris reinforced Ms. Wienner’s call to action with a reminder that we are in a fight against apathy. If Republicans sit on the couch and do nothing, the leftist loons will decide our fate.
Chairman Lee Dean asked, “How many 30RD Republicans did not vote in 2021?” Since Harrington typically votes 60% our way, some assume that voting is not important. Wrong! We must get more folks out to vote to benefit the entire state.
Again, demonstrating his command of the electorate demographics and ability to influence outcomes, Chuck Welch spoke about his outreach efforts to local Haitians and Hispanics, a growing part of the potential Republican base, due to their dislike with Biden’s policies, especially towards abortion. 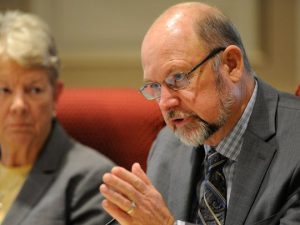 Senator Dave Lawson alerted the group about the movie “Unsilenced” where the Chinese Communist Party turned an actual peaceful protest about religious freedom into propaganda, calling it an insurrection. Sound familiar? Didn’t Democrats do the exactly same thing regarding the Jan. 6 event? Think that in America, propaganda/fake news couldn’t possibly be used to control our lives? Think again. COVID ‘emergencies’ have already been used to suspend civil liberties and control our lives.
Senator Lawson is working to have this movie screened in Dover, so that more people will understand how we are being manipulated. Meanwhile, learn more by watching the trailer: https://www.imdb.com/title/tt10514056/ 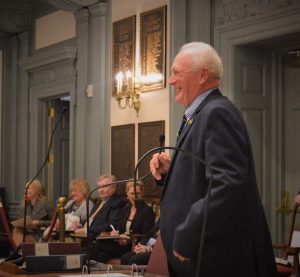 The group congratulated Senator Dave Wilson for being 2022’s first Jefferson Award winner. The Jefferson Awards are presented to unrecognized citizens on Delmarva who provide extraordinary public and community service. Mr. Wilson is well-known across the state for his volunteer work with various organizations. Dave thanked the group for their recognition, said that he is humbled, and is always looking to help out everyone he meets.
Lee Dean is planning to have a Voter Registration Booth in March in Harrington and Felton. This will be nonpartisan, just helping people get registered. Please contact Lee if you can volunteer or have suggestions, by phone: (302) 270-6786 or (302) 398-4338, or by email: lmd688@hughes.net.
This year we will need Checkers/Challengers at each poll station. Not to just put a check mark by names, but to actually inspect voter credentials, to ensure the integrity of the system. The Board of Elections will require a 3-hour class for certification. Schedules and more information will be posted online later. https://elections.delaware.gov/information/electionofficers.shtml
30RD’s next meeting will be on Feb. 28 at the Harrington Stargate Diner at 6:30 pm. Plan to attend, and bring a friend and neighbor.
Thanks.
John Jones, 30RD Secretary